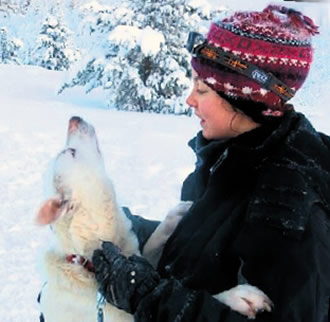 I grew up in the Australian outback – a place where summer temperatures regularly exceed 40° Celsius and 'winter clothing' means a long-sleeved shirt over the top of your normal summer clothes. I didn't see snow until I was 23, on a holiday to America. Yet, as a teenager, I decided that one of my life goals was to visit Finland – in particular, the area above the Arctic Circle, the complete 'polar opposite' to anything I had ever experienced.

Ten years later I finally got my chance – I planned 2 months of travel across Europe, with my last and longest stop being in Finland. In Rovaniemi, I spent all the money I had left doing all the usual tourist things, which included a visit to a husky farm for a short ride in a sled pulled by a team of dogs. Looking back, the ride couldn't have been more than a 500-metre loop, but it was a phenomenal experience and I was hooked.

Often when you have an idea in your head, your imagination runs wild and the reality can fall short of your dream. Luckily, Finland didn't disappoint and on return to Australia, I immediately began searching for ways to go back and spend more time there.

The answer was found in a small village called Hetta, 300 kilometers north of the Arctic Circle. There is a company that runs all kinds of dog sled adventures there, and it is staffed entirely by volunteers from all over the world. They agreed to take me as a trainee, and on 1 November 2012 I was standing out in the snow in sub-zero temperatures, dishing out 80 kilograms of semi-thawed meat to one hundred and ten howling huskies.

Almost 2 years later, I'm back in Australia impatiently waiting out the northern hemisphere summer so I can return to the Arctic, this time to a farm on the Arctic Circle in Rovaniemi, for my third winter season as a sled dog guide.

If you just followed the photos I post on Facebook, you could be forgiven for thinking that I was just away on an extended holiday. The scenery is stunning, the lifestyle is surreal and spending every day with a hundred cute, fluffy huskies – that couldn't possibly be real work, right?

Sure, the experience of gliding through a snow-covered forest with a team of beautiful arctic dogs is like a fairytale and I would happily do that for hours and hours every day, but the reality is that all the daily work on the farm, to get to that point, is really hard – standard tasks like feeding and cleaning take a lot of time, the number and noise of both dogs and people around makes everything seem constantly chaotic, and even simple things like tying a rope become that much more challenging in -40 degree temperatures. Ending the day with frostbite is almost like a rite of passage here.

It can be hard to get up early day after day, starting work in the pitch dark and freezing cold, skipping meals, and literally running around for hours, but there is some unknown driving force that makes you want to keep going back for more, and every day feels like an accomplishment – you go to bed exhausted, but happy.

Finnish Lapland is one of the most beautiful places on the planet and one of the things I enjoy the most is the 'outside' culture – people getting out and taking advantage of endless hiking trails or ski tracks, or just generally spending time being part of nature. Everyday life in Finland is also just as great as I could have hoped for – everyone is extremely kind, willing to go far out of their way to help, and is genuinely interested in hearing why you have traveled so far to live in their cold little corner of the world.

I know that I won't live in Finland forever, but for now, it is a place I am lucky to be able to call home.