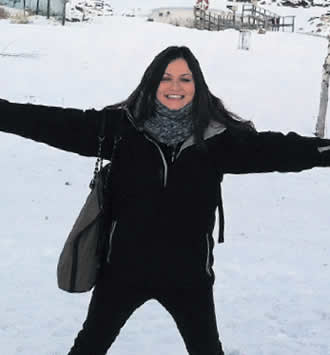 "Goodbye Finland. To your dancing trees on the frozen lakes, to the shy sun that bursts at midnight during the summer, to the magnetic, icy eyes of your people... to the Northern Lights, warmth, love: to what I chased 'til the end..." This was my farewell to Finland after my Erasmus period. Because in Finland I did fall in love, and thanks to the warmth that it gave me, even if I haven't been able to see the real Northern Lights, I have seen MY Northern Light: a light inside me that helped me to fight the dark days during the wintertime.

A light that brought a new awareness of myself in a country that challenged my cleverness and pushed me beyond my personal boundaries. It may seem a little bit mawkish as an introduction to an exchange period, but nobody said that Erasmus is just drinking and partying – especially when you are 27 (which is older than the other students) – it also means diving into another culture, discovering the Kalevala, which is very appealing for somebody who, like me, comes from the Mediterranean (Italy), and moreover, before landing to Finland had spent 3 months in California: three places with such different cultures. Erasmus for me has also meant appreciating the good metal music that animates the concerts in the Tampere area, as well as the silence of the countless lakes around the area, that also offers unexpected beaches hidden in the meanders of the forests: those forests that also divide one district of the city from another (weird but amazing for me!).

My choice of Finland as the destination for my Erasmus was initially rational, not emotional, in the sense that there I found many English-taught courses among the places proposed by my home university in Rome. And while I am writing from that very same Rome that I left nearly 1 year ago, I can still feel on my skin the sense of cold (what a cliché!) that overwhelmed me when I thought about going to the University of Tampere. Eventually that cold arrived, and the love for the place and the people surrounding me turned out to be insufficient to fight the northern climate. But, surprisingly, the cold also brought some awesome phenomena and experiences that I would have never known otherwise: a frozen lake where – according to what the Finns told me – becomes a public road in the wintertime, that of course vanishes in the summer! And it brought more light, since the few hours of daylight in January become amplified when snow falls (that same snow that I saw falling even on the 4th of May!).

So I decided not fight the cold anymore, but instead to live it in the colorful dresses of the Sami people that I met in Lapland, in the fur of the husky puppies that I petted there, in the minimalist design of Helsinki's architecture, in the boats floating on the river of Turku and in the medieval mood found in its castle, in the joulutori [Christmas market] of Rovaniemi, and in the quiet sea of Pori. It is in these features of the country that I found the emotional benefits of my choice, initially obscured to me.

This has been My Finland: and I say mine because, even though it has been historically a land conquered and dominated by foreigners for many centuries, Finland is not afraid of the strangers but – the other way around – it appreciates the cultural differences as a richness, and allows everybody to live the country in his/her own way, boosting thus its multifaceted, sparkling personality that has been recognized as a winning one all over the world.