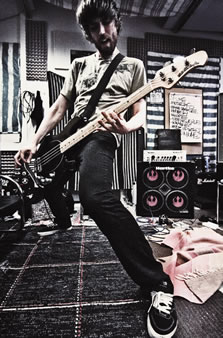 Many are familiar with Finnish metal. Fewer know that there is a grittier, more vibrant and, apparently, a more violent side to the Finnish music industry.

FINNISH punk music has its international fans. A Cracow city guide describes one of the city’s bars as “a great place to see violent Finnish punk bands.” In 2005, the Finnish punk band Endstand was followed by six Austrian fans during the band’s record release tour in Finland.

However, Endstand is a rare exception, conclude Samuli Peurala (Lighthouse Project), Jani Koskinen (I Walk The Line), and Tommi Forsström (Echo is your love), who together have around 1,500 gigs under their belts.

“For these six Austrians, Endstand is obviously significant, but it doesn’t imply that the whole scene is doing well,” Forsström argues. “Even if these six were the only ones who liked Endstand, they would follow the band around in Finland.”

“Unless you play something similar to Endstand, Kaaos or Terveet Kädet, the fact that you are from Finland is insignificant,” claims Koskinen. “Of course, there are good bands in Finland – they just have a hard time getting the attention they deserve.”

Yet, the success of the late 80s and early 90s has seen a vibrant and diverse scene emerge. According to Forsström, however, the concept of Finnish punk is extremely vague. “Even the bands’ motives have changed. The bands in the 80s were mainly motivated by discontent,” he explains. “Whereas in the 90s, bands emerged out of pure interest. The high standard of living allowed people to do what they wanted. Now, the scene is active and diverse but underground. No one has made an international breakthrough since the 80s,” Forsström concludes.

Despite the unlikely chances of international success, there is something in punk that has attracted Finnish youth for decades now: a chance to get your hands dirty. When the scene emerged in Finland, in the later 70s and early 80s, the first bands had to start from scratch. Organising tours, recording and publishing took devotion and persistence and as a result, the DIY-mentality still defines the scene. “With Aurinkokerho, we just sent letters and c-cassettes to people and crossed our fingers,” Koskinen says. “And somehow our first tour abroad came into being.”

“In punk, it’s so much easier to find yourself really participating,” Forsström notes. “For me, it was almost like a secret society and definitely revolutionary – despite the fact that it was over 20 years old by the time I got into it.”

Our interviewees are no strangers to work. In addition to their bands, Koskinen and Forsström are co-founders of the labels Combat Rock Industry and If Society, respectively. Peurala, on the other hand, is associated with the skateboard company Tikari.

Forsström diagnoses his involvement in four bands, a label and a music shop as a sign of workaholism, “I feel bad when I’m not active – maybe it’s a sign of deeply rooted mental problems. Still, I want to be a part of all the aspects of punk. For me, this total involvement brings so much to the whole and emphasises the feeling of achievement,” he adds. “I feel privileged doing something I have always dreamed of. Even so, I made a decision not to quit my daily job because it provides me with the financial freedom to do what I want to in music.”

“But this is not just a job,” Koskinen points out. “Despite the long hours I put in, I’m still not on minimum wage. But then again, most of this I’d do without any income.” “And basically any money that is made is invested in the band,” adds Peurala.

There is more to punk than the music, and the essence of it is difficult to dress up in words. It is an approach adopted by bands, artists, labels or even entrepreneurs. “Punk is a rather loose concept and definitely incorporates more than the music,” starts Forsström. “I’m sure everyone around this table has their own definitions of punk. To me, punk has lost its significance as music and I feel the concept of punk is more closely related to matters beyond music. Labels like Dischord and Touch and Go and especially the way they operate is punk,” he explains. “Punk is impulsive and you must be ready to commit yourself to the things you believe in,” Koskinen muses.

On the other hand, punk is a label used for marketing purposes similarly to grunge in the early 90s. As a result, punk has commercialised, lost much of its outrageousness and lacks the aforementioned absolute devotion.

“The scene has stagnated,” states Peurala. “Punk desperately needs new revolutions,” Forsström pleads. “Punk can, and should, contradict itself – it is a feeling. Instead, you have to wear a uniform and have to think a certain way. Pretty much the only choice you can make is whether to drink or not,” he sighs. “I wish there was a group of 20-year-olds who would render us old-timers useless. Sometimes, I feel like supporting the National Coalition Party just to stir up some conversation.”

So, there is a demand for new revolutions. How do the old-timers see the future of punk?

“I’ve already achieved much more than I ever thought was possible,” Koskinen says. “We have played in people’s living rooms, a common location for a punk gig in the US, the main stage of Ruisrock and everything in between. However, I never consciously decided this would be my job – things just led to another. I got here by doing what I love and that’s what I’ll do in the future also.”

“I believe punk can still represent the same values it did to us,” Koskinen goes on. “I mean, punk has not changed, but it did change my world. It still has the same potential – that’s what matters.”

“Punk has definitely not changed – I have changed,” replies Forsström. “And it’s more important to change your own world than universal issues. Punk is about small revolutions. Gradually, I became to understand how much it matters what other people think about my work. However, at the same time, their opinions do not dictate what I do. I do this for myself,” he explains.

“It has never been a struggle for me to carry on,” Koskinen grins. “It’s been much harder to curb my enthusiasm.”