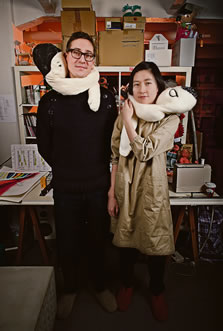 She started her design studies in Helsinki in 1998. Now ten years have passed and she runs a kiosk of her own with her partner Johan Olin in the heart of the capital. Instead of shampoo, this kiosk sells clothing and decor items designed by Song and Olin. It is located next to the Kiasma museum where the duo held an exhibition called Suomen salat (Top Secrets of Finland) in the summer of 2007. We stepped into the tiny 12 square meter Salakauppa (Secret shop) and met the couple.

Aamu, you originate from South Korea’s capital Seoul. How did you end up running a designer kiosk in the centre of Helsinki?

Aamu: The first time that I came to Finland was ten years ago when I was backpacking in Sweden, Denmark and Norway. Then I came to Finland through Inari. That was a really nice place. Somehow, I knew that I would come here again.

Johan: I feel that there is a straight connection between Aamu’s first visit to Finland and this shop. Her first experience in Finland was a very small kiosk run by some old Sami lady.

Aamu: I needed some shampoo and I went to this kiosk. It was so small. There was only one kind of shampoo, Erittäin hieno suomalainen shampoo. In Korea you have to know what kind of hairstyle or quality you have, do you need vitamin e, b or z, there are so many options. I really liked it that there was only this one thing to choose from. Somebody has asked me before, was that really the reason why I came to Finland, a kiosk? Maybe so.

So it wasn’t a shock for you to move here?

Aamu: It was a bit of a shock. My previous visit to Finland concerned mostly the north of the country so I got to know a little about Sami culture. I had spent only a couple of days in Helsinki. But life in the capital wasn’t the Sami-kind of life. The first days that I spent in Finland were so lonely. But now we have completed many projects and met a lot of people, and I have lots of friends.

What was so special about Finnish design that it made a Korean girl move across the world?

Aamu: I think that for Finns design is not about style, it’s about life. It’s not about colour, it is just what it is. That’s what I have realised about the Finnish way of living. For example, in the Finnish language you call furniture, literally, a “room tool.” In Finnish design you don’t have to underline that this is a practical thing, it’s something which comes naturally.

You hooked up with Juuso at The University of Art and Design Helsinki, where you both studied. How did you end up working together?

Johan: We participated in a few design competitions when studying and then created the COMPANY label in 2000. We just noticed that we had some common interests and kept on working together.

Aamu: We have ended up here naturally. We have no plans.

Johan: Actually, we usually try to plan things, but something always happens and the plans often change.

After being in the country for ten years, you must have gotten used to Finland. How do South Korean and Finnish lifestyles compare?

Aamu: Life in Korea is totally opposite. The food is delicious; I eat more there than here. At the moment I feel like I’m living in two places. Korea is my home, but this is my home now as well. I visit maybe once a year, but last year we had a four-month residence there. I missed home very much and I felt like I had brain damage from the Finglish. I think it’s a little unhealthy not to use your mother tongue for many years. I wanted to hear and use the Korean language and luckily we were able to combine it with work. We were working with Juuso for a company which produces cultural events, shoes, bags and clothing. We’re very interested in shoes and bags.

How did Johan fare in Korea?

Johan: It was quite a language bath. It was really all about language. I think that my record was sitting seven hours in a meeting without a single word of English. It was kind of fun. My skills still aren’t so great but I liked it very much though.

How would you describe Korean design in contrast to Finnish practicality?

Johan: I was observing it as an outsider and I felt that design was just something that was made for different purposes. It’s not a continuation of anything despite Korea being one of the oldest civilisations. Design seemed to be only an added value. It has a bit of a bad label there, unfortunately.

Aamu: Then again, in the Korean marketplaces there are many things, like fisherman’s shoes and farmer’s gloves, which have great designs, but they are not seen as such. For me, city life is artificial. Unfortunately I come from Seoul. I’d like to come from a really small village. If I ever move back to Korea, I’d like to live in a very small place.

What are your most Finnish characteristics and how would you, Aamu, describe Johan’s Korean side?

Johan: When we were in Korea that was actually what they told me. The Korean way to eat is to enjoy it very openly, including making a lot of noise, making it quite messy and doing it very fast. That’s fitting for me. We eat kimchi at home as well.

The new design kiosk Salakauppa opened a couple of months ago. How has it felt to be a kiosk entrepreneur in Finland?

Johan: We wanted to also sell the things we make, not only design them. We tried to close the design circle, to get more out of making products. We were also very surprised to realise how many good Finnish manufactures there still are. It is like a secret community.

Aamu: It’s been nice, but sometimes a bit tough as well. We not only design, but also organise the shop, do marketing and sell items among other things. We do everything and are everything. It’s like being a bird, tiger and crocodile at the same time.

Your work represents individual quality design. What do you think of big consumer brands like IKEA and H&M?

Aamu: It’s good that there are different types of places. If the world was one big Salakauppa, we would then do the H&M thing. People need and want different things.

Johan: I personally like H&M. Pretty much all long-lived products are nice. But we saw that this kind of a place was needed too.

How would you describe good design?

Johan: It’s functional and makes sense. In the Kiasma exhibition this one lady came to ask if we could make a thousand pieces of our baggy jeans so she could sell them in southern Europe. I answered that we can’t and don’t want to do that. It would make sense in the military or in some school system, but it didn’t make sense that everybody would be walking around southern Europe wearing the same baggy jeans.

Aamu: A good design is original, different from the things done before; it connects with you and makes you return to the shop. I feel, however, that you can’t really say what is good or bad in a design.

Design itself is sometimes labelled as trendy, expensive and fancy. Did you want to make a statement by bringing design to a kiosk?

Aamu: Not really. The rent was suitable and the place was just the right size for us. The location is also very good.

Johan: Yep, many people stop in to ask at the IKEA bus stop. It’s actually very nice to have a lot of people passing by. That was one of the main reasons to locate the shop here. Previously we had been touring with the shop and selling things either in art galleries, museums or at design-related events.

Johan: I’m just waiting for the summer. Then we can have a terassi (a terrace) and we can keep the shop space more open. Aamu: My vision for the year is big, bright and always exciting.